Novels in verse have been around since the Iliad and Odyssey! Today, it’s rare to find one published for adults, but the form is thriving in works for children and teens. Kwame Alexander combined verse and basketball in The Crossover, winning the prestigious Newbery Medal. Thanhhà Lai’s autobiographical verse novel, Inside Out and Back Again and Jaqueline Woodson’s verse memoir Brown Girl Dreaming were both National Book Award winners.

Poetry packs a big punch, so it makes sense that authors use it to tell stories with high emotional impact. Verse novels for teens often address tough subjects: sexuality, identity, social justice and addiction. Older teens or adults looking for a powerful read that can be devoured in a few sittings should consider one of these:

This book is a fairy tale
in which I am the prince
and the princess. I am
the king and the queen.
I am my own wicked
Witch and fairy godmother.

Michael is mixed-race and gay, growing up in London. All his life, he’s navigated what it means to be Greek-Cypriot and Jamaican, but never quite feels Greek or Black enough. Michael’s coming out is the start of learning who he is and where he fits in. When he discovers the Drag Society, the Black Flamingo is born.

Crank by Ellen Hopkins (Fiction: grades 9+)
This is the first in a compelling trilogy about a teen struggling with addiction, loosely based on the experience of the author’s daughter.

Life was good
before I
met
the monster.

After,
life
was great,
At
least
for a little while.

Kristina Snow is the perfect daughter: gifted high school junior, quiet, never any trouble. Then, Kristina meets the monster: crank. And what begins as a wild, ecstatic ride turns into a struggle for her mind, her body, and her life.

Long Way Down by Jason Reynolds (Fiction: grades 7+)
This powerful book on gun violence takes place during a sixty second elevator ride: the time it takes a kid to decide whether or not he’s going to murder the guy who killed his brother.

A cannon. A strap.
A piece. A biscuit.
A burner. A heater.
A chopper. A gat.
A hammer
A tool
for RULE

Or, you can call it a gun. That’s what Will has shoved in the back waistband of his jeans. Will knows the rules. No crying. No snitching. Revenge. That’s Will’s plan until the elevator door opens and he is joined by an unexpected passenger.

Taller than even my father, with what Mami has always said

Was “a little too much body for such a young girl.”

Now ask me to send them pictures of myself in a thong.

Ever since Xiomara’s body grew into curves, she has learned to let her fists and her fierceness do the talking.  But Xiomara has plenty she wants to say, and she pours all her frustration and passion onto the pages of a leather notebook. She recites the poems she has written to herself and wonders if she has the courage to share them with the world. 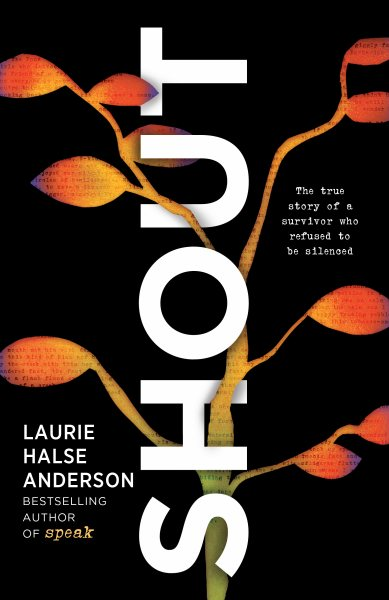 Veteran of D/depression,
the German war and atrocities
a handsome boy married the tall girl
who looked like Katharine Hepburn
two kids adrift in a city far from home
two ships ripped from their moorings.

Mom told me the story when I was in high school,
on a night when Daddy’s drinking
drove our family to the edge.

In free verse, Anderson shares deeply personal stories and reflections, along with a hopeful call to action for her readers and all survivors of abuse.

Annotations from the publishers.