Blog readers, we’ve almost made it to Spring! Days are getting warmer (albeit sometimes rainy) and it’s time to start thinking of sunshine and long days reading outside. Reserve these online at www.livingstonlibrary.org or via https://ebccls.overdrive.com.

From nostalgic memories of youth, meditations on music, and an ardent love of baseball to dreamlike scenarios and invented jazz albums, together these stories challenge the boundaries between our minds and the exterior world.

Broken: (In the Best Possible Way) by Jenny Lawson

As Jenny Lawson’s hundreds of thousands of fans know, she suffers from depression. In Broken (In the Best Possible Way), she explores her experimental treatment of transcranial magnetic stimulation with brutal honesty.

Mother May I by Joshilyn Jackson

The New York Times bestselling author of the critically acclaimed Never Have I Ever builds on her success with this addictive novel of domestic suspense in which a mother must decide how far she is willing to go to protect her child and the life she loves; a chilling and thoughtful tale of power, privilege, lies, revenge, and the choices we make, ones that transform our lives in unforeseen ways.

A warm, incisive new novel about the enduring bonds of marriage and friendship from Cynthia D’Aprix Sweeney, author of the instant New York Times bestseller The Nest.

The Venice Sketchbook by Rhys Bowen

Love and secrets collide in Venice during WWII in an enthralling novel of brief encounters and lasting romance by the New York Times bestselling author of The Tuscan Child and Above the Bay of Angels.

When the Stars Go Dark by Paula McLain

From the New York Times bestselling author of The Paris Wife comes an atmospheric novel of intertwined destinies and heart-wrenching suspense: A detective hiding away from the world. A series of disappearances that reach into her past. Can solving them help her heal?

The Good Sister by Sally Hepworth

Twin sisters who are polar opposites but who are harboring a deep, dark secret about their sociopathic mother must face the consequences of both her actions and their own when one tries to start a family.

The Son of Mr. Suleman by Eric Jerome Dickey

Targeted and blackmailed by racist colleagues, a Black professor at a Memphis university is called away from a whirlwind romance by the death of his father and a family that has never acknowledged him.

Hour of the Witch by Chris Bohjalian

A resourceful Puritan woman in 1662 Boston plots to escape a violent marriage only to find herself targeted by her disapproving and superstitious neighbors for failing to save a child’s life. By the best-selling author of The Flight Attendant.

A marvelous new novel from the Pulitzer Prize winning author of The Lowland and Interpreter of Maladies – her first in nearly a decade. The story follows the routines of a misfit city dweller who experiences a year of remarkable transformation in the aftermath of a parent’s death.

I am finally catching up with some of the great middle grade books I didn’t have a chance to read last year! Here are a few of my favorites:

Wink by Rob Harrell
Fiction: grades 4-7
Touching and funny, this book is perfect for readers who enjoyed Wonder by R.J. Palacio or Drums, Girls, and Dangerous Pie by Jordan Sonnenblick. 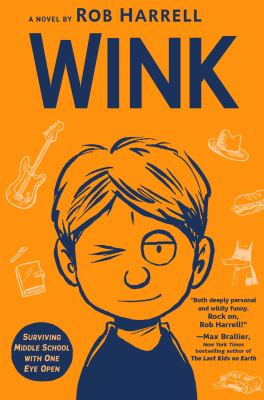 Ross Maloy just wants to be a normal seventh grader. He doesn’t want to lose his hair, or wear a weird hat, or deal with the disappearing friends who don’t know what to say to “the cancer kid.” But with his recent diagnosis of a rare eye cancer, blending in is off the table.  Based on Rob Harrell’s real life experience and packed with comic panels, this novel is hilarious, uplifting and unforgettable.

Also available as an ebook on Libby.

Show Me a Sign by Ann Clare LeZotte
Historical Fiction: Grades 4-6
Inspired by the true history of a thriving deaf community on Martha’s Vineyard in the early 1800s, this book is a good match for readers who loved The War That Saved My Life by Kimbery Brubaker Bradley.

Mary Lambert has always felt safe and protected on her home island of Martha’s Vineyard.  Her great-great-grandfather was an early English settler and the first deaf islander.  Now, over a hundred years later, many people there — including Mary — are deaf, and nearly everyone can communicate in sign language.  But recent events have brought danger to the island.  An unscrupulous young scientist arrives to study the island’s deaf residents, taking Mary as an unwilling subject for his experiments.

Also available as an ebook on Libby.


Before the Ever After by Jacqueline Woodson
Novel in Verse: Grades 4 & up
Woodson received the 2020 MacArthur “Genius” Fellowship, and won the National Book Award and Newbery Medal for her autobiography, Brown Girl Dreaming.  She can be counted on to deliver a powerful story with beautiful language.  Her new book will appeal to her many fans, and also to readers who enjoyed Ghost  by Jason Reynolds.

For as long as ZJ can remember, his dad has been everyone’s hero.  As a talented professional football star, he’s beloved to the neighborhood kids and millions of adoring sports fans.  But lately ZJ’s dad is having trouble remembering things, and seems to be angry all the time.  ZJ’s mom explains it’s because of all the head injuries his dad sustained during his career.  ZJ can understand that–but it doesn’t make the sting any less real when his own father forgets his name.

Also available as an audiobook and ebook on Libby.

The Magnificent Monsters of Cedar Street by Lauren Oliver
Fantasy: Grades 4-6
This adventure is a great pick for Harry Potter fans, especially those who could ace the Care of Magical Creatures exam.

Cordelia Clay’s father is a veterinarian who saves and heals magical creatures.  Their home on Cedar Street is full to the brim with dragons, squelches,and diggles.  But their work must be kept secret.  Most of their neighbors aren’t welcoming to the type of “patients” they treat.  One morning, Cordelia discovers that her father has disappeared, along with nearly all the creatures.  Cordelia sets off to find them with only a handful of clues and an odd assortment of monsters to help her.

Also available as an ebook on Hoopla.

Annotations from the publishers